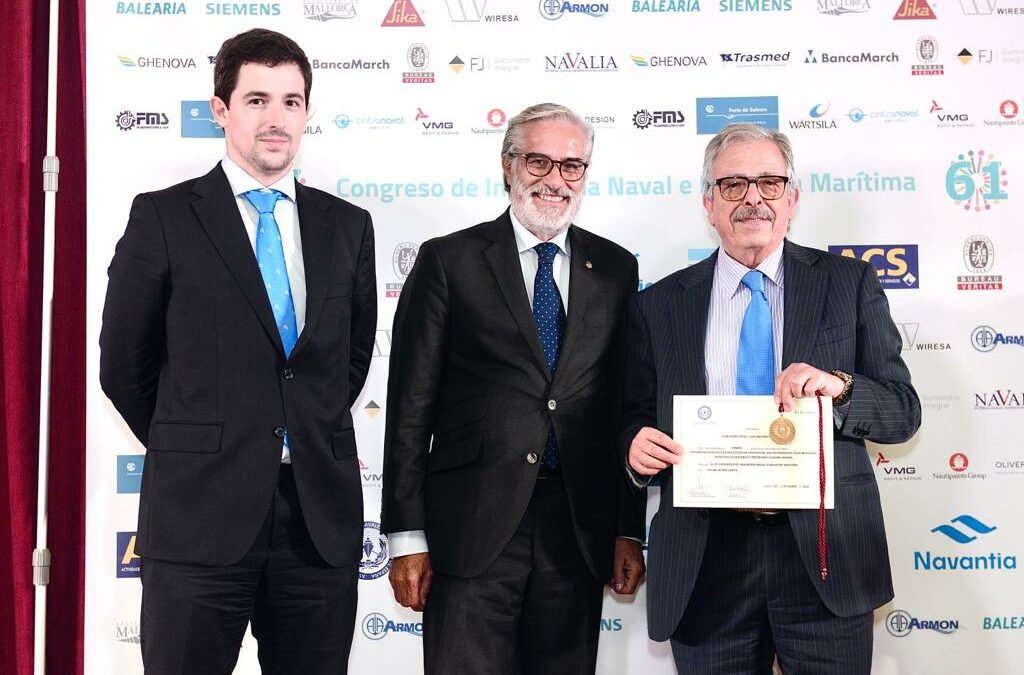 During the celebration of the 61st Congress of Naval Engineering and Maritime Industry, TSI S.L. received the gold award for best paper in his work on his “Non-Intrusive Cavitation Detection System” during the technical sessions of the event.

The 61st edition of the Annual Congress of Naval Engineering and Maritime Industry, organized by the Association of Naval and Ocean Engineers of Spain (AINE), was held in Palma de Mallorca from October 26th to 28th. The event brought together industry professionals from all over the country and this year opened its doors under the slogan “The sea, green impulse towards decarbonization”. During the event, a series of technical presentations and round tables were given by professionals from important companies in the sector, with the common goal of achieving stable development and a sustainable impact on society. After the 35 presentations and the more than 100 speakers who attended the conference, the awards ceremony was held for those works that were most relevant. TSI S.L- Técnicas y Servicios de Ingeniería -, won the gold award for the best paper, with his work under the title “Non-Intrusive cavitation detection system, a tool to mitigate noise in the oceans and protect marine wildlife” presented by D. Publio Beltrán Palomo and D. Luis Antonio Piqueras and made in collaboration with D. Richard Garcia.

TSI has been working on this development for more than 5 years. It has participated in different European projects in which the detection of cavitation for its control was dealt with, such as AQUO or SATURN. During its study and development period, TSI’s main objective was to create a non-intrusive system capable of automatically detecting cavitation, and this system would have the ability to quantify the intensity of the phenomenon. This information is of great value to ships as they can more accurately monitor their acoustic signature, and can act in time to mitigate the adverse effects of cavitation on marine wildlife. As a culmination of the event, on October 28, Ms. Sara Aagesen, Secretary of State for Energy of the Ministry for Ecological Transition and Demographic Challenge; and Carmen Artigas Brugal, Secretary of State for Digitalization and Artificial Intelligence of the Ministry of Economic Affairs and Digital Transformation made the closing speech together with José Nasarre, Director of the Balearic Islands Port Authority.

For more information about the Ni-CDS system click here.

THE CHILEAN SHIPYARD ASENAV HAS SELECTED TSI FOR THE DYNAMIC-ACOUSTIC DESIGN OF THE NEW FISHING AND OCEANOGRAPHIC RESEARCH VESSEL FOR SUBPESCA.

The Chilean shipyard ASENAV has selected TSI S.L -Técnicas y Servicios de Ingeniería- as noise, vibration and radiated noise to water (URN) consultant. TSI will be present during the different stages of design, construction and official tests of the fishing and oceanographic research vessel -FRV- being built for SUBPESCA.