TSI, presents the FIBRESHIP project at the IMO 2020 in London 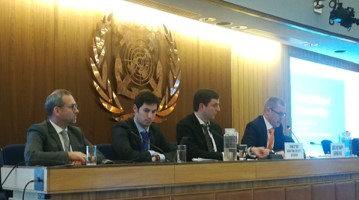 Both of these project are similar goals on the using of FRP (Fibre-Reinforced Polymers) in the Shipping and Shipbuilding industry but with different approaches to face the technical challenges in terms of fire safety and structural performance.

At the beginning of the presentation, the general outline was stated by Stephane Paboeuf from Bureau Veritas, and both motivations and the current regulatory framework were described as well as the different approach developed for each project in terms of the time line.

Secondly, the FIBRESHIP project was described by Alfonso Jurado (FIBRESHIP coordinator, from TSI – TÉCNICAS Y SERVICIOS DE INGENIERÍA), defining its main particulars and goals to enable the designing, construction and operation of large-length vessels over 500 GT fully in composites.

Furthermore, the potential benefits of the use of these materials was presented as well as the main outcomes of FIBRESHIP, such as the structural designing of three vessel, the development of structural and fire performance criteria as the basis of future standards, the current market readiness of some vessels segments according to smooth scale increasing and the most significant result of the project: the FIBRESHIP demonstrator (https://www.youtube.com/watch?v=iO9S1uSPehg), consisting of a ship block of a 85m length fishing research vessel fully in composites.

Subsequently, the RAMSSES project was described by Matthias Krause (RAMSSES coordinator, from CMT – CENTER OF MARITIME TECHNOLOGIES) defining their motivations and goals regarding the demonstration of advance material solutions for sustainable and efficient ships, being a short-term approach based on existing rules and technology to include new lightweight materials in vessels.

All the demo cases of RAMSSES were identified and it was explained the Smart Track to Approval, a strategy to obtain the certification considering stakeholders actions and several factors (technical, standards, methodologies, validations, etc.). The standard fire risk scenario developed in RAMSSES was described, specifying its accordance with FTP Code; as well as the innovation platform used for gather all the data regarding the use of FRP in the shipbuilding sector.

Last but not least, the general findings were explained stating the advantages of composites, the feasibility to build larger vessels in composites and the development of a new approach for fire division rating and a fire global approach to assess the fire risk.

This dissemination action was carried out with the objective of engaging IMO members to schedule the evaluation of MSC Circ. 1574 and potential use of composites in next IMO SDC sessions.

Considering the fact that it will be a long path to set a new regulatory framework, nevertheless, we hope that the interest of the marine stakeholders as well as the results, innovations, developments and conclusions from RAMSSES, FIBRESHIP and other projects focused on the FRP for large-length vessels can be useful for the process and the IMO Member States.

THE CHILEAN SHIPYARD ASENAV HAS SELECTED TSI FOR THE DYNAMIC-ACOUSTIC DESIGN OF THE NEW FISHING AND OCEANOGRAPHIC RESEARCH VESSEL FOR SUBPESCA.

The Chilean shipyard ASENAV has selected TSI S.L -Técnicas y Servicios de Ingeniería- as noise, vibration and radiated noise to water (URN) consultant. TSI will be present during the different stages of design, construction and official tests of the fishing and oceanographic research vessel -FRV- being built for SUBPESCA.

ROCKWOOL invites TSI to participate in NAVALIA2022 through its director Mr. Publio Beltrán, as speaker in the conferences “Reliable acoustic performance in the Shipbuilding Industry”.

D. Publio Beltrán, CEO of TSI, attended as a speaker at the conference on “Reliable acoustic performance in the Shipbuilding Industry” at NAVALIA 2022.