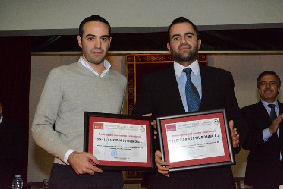 On November 29, 2013 during its annual festival, the Mining and Industrial Engineering School of Almadén- EIMIA has granted to TSI- Técnicas y Servicios de Ingeniería, S.L, the Special Award for Collaborating Company.

The Mining and Industrial Engineering School of Almadén- EIMIA, was founded in the reign of Carlos III in 1777, directing the first studies of geometry and Mineralogy Underground.

Throughout his brilliant career training and reference centre, leave their classrooms teachers and students as bright as Fausto Elhuyar, who discovered tungsten, and Andrés Manuel del Río, who discovered vanadium. Since October 1, 1985,

TSI, convinced of the importance of University-Companies collaboration, it has become worthy of this award as a result of Predictive Maintenance and Vibration Seminars that have been taught in this University.

The awards ceremony was held in the Auditorium of the School presided by the Director Francisco Mata, the JCCM Industry, Mines and energy General Manager Alfonso Vazquez Seija. Representing TSI, its Commercial Manager Ruben Ramirez Vazquez received the award.