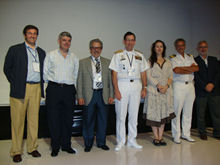 Organized by COTECMAR and within the framework of the Fair COLOMBIAMAR2015, between March 11-13h, 2015 has taken place in Cartagena de Indias (Colombia), the 4th International Congress of Design and Engineering Naval CIDIN2015 that has had the participation of

a select group of national and international companies. Among the foreign companies that have participated are included Spanish companies involved in the marine sector as well as the Spanish Navy.

Parallel to the Fair, the International Ship Design and Naval Engineering Congress (ISDNEC) is one of the main scientific-academic events in Latin America that allows knowledge transfer related to naval design and engineering among different players from Scientific, Production, Technological, and Financial environments of the global shipbuilding industry.

The ISDNEC, joins the International Congress on Engineering for Sustainable Development in Riverine Transport (IDS, for its acronym in Spanish), an event that aims to create a framework where different scientific, academic, and entrepreneurial players contribute actively to the development of riverine transport and exploitation systems, to make it safer, more efficient, ecologically friendly, and sustainable.

As part of the Opening Ceremony, and as an example of the consolidation of relationship between Colombia and Spain, it has been a great honour to see for the first time the presence of the Spanish Navy represented by the Commander José Maria Riola, who presented the keynote “Propulsive Qualities of Warships type Catamaran”.

In the Academic Program, there were the followings participants: D. Israel Lozano, representing NAVANTIA, who presented the conference “Support to Life Cycle NAVANTIA”; and Antonio Fernandez Jove, representing FERNANDEZ JOVE, who

Special mention at the 4th International Congress of Design and Naval Engineering the great acceptance that has received the delegation of Spanish companies and institutions. It is important the participation of the Spanish Marine Sector in this events, in order to establish closer partnerships with Latin American countries.