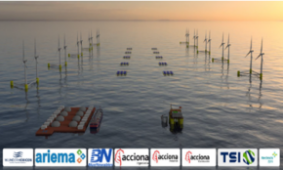 The project aims to design and validate experimentally the first offshore green hydrogen plant operated by eolic and photovoltaic technology. This project has been funded with more than € 6 million by the research program “Misiones Ciencia e Innovacion”.

TSI will participate as a leader of one of the six main activities of the OCEANH2 project, which will be coordinated by ACCIONA and framed within “CDTI Misiones” programme. The project objective is to design and validate the first offshore green hydrogen generation, storage and distribution plant in Spain. The project will propose a modular solution oriented towards a new market paradigm in offshore renewable electricity generation, based on wind and floating photovoltaic technology.

The consortium of the OCEANH2 project is composed by the entities ACCIONA, TSI, Redexis, Ariema, Wunder Hexicon and BlueNewables, and other twelve Spanish Research centers that work collaboratively in the context of this project. In this way, six Spanish Autonomous Communities (Madrid, Canary Islands, Andalucía, Cantabria, Navarra and Catalonia) will be involved in the project, guaranteeing the technological synergies and national scientific capacities required for the consecution of the project.

OCEANH2 is based on the study of various scenarios for the implementation of an offshore hybrid electricity generation system, evaluating alternative design strategies in the hydrogen production, storage and distribution chain, which serves to identify the scenarios with the greatest potential for the proposed materials. Once that study has been completed, the components of the developed engineering solution will be validated on a laboratory scale in the research facilities of Cehipar, IHCantabria, CEDEX, etc.). Apart from that, TSI with the support of CIMNE will be in charge of the integration of a monitoring system based on a platform IoT (Internet of Things) that facilitates the operation, maintenance and management of the hydrogen plant. Eventually, the challenges derived from the construction work and scaling of the green hydrogen generation plant will be addressed through an innovative process that enables the optimization of the initial design. Moreover, TSI will participate in the definition of the structures of a wind and photovoltaic offshore platforms which will be designed by Wunder-Hexicon and BlueNewables, respectively. For such purpose, the consortium will carry out an alternative design in composite materials apart from the original design in metallic materials.

As highlighted by the project coordinator, ACCIONA: “The knowledge resulting from this project may be transferred to application areas and markets which had not been previously considered, achieving a greater competitiveness of the participating companies and a better sustainability in the sector. This project will therefore benefit not only the creation of employment but also the mobilization of future investments to enable the implementation of the innovative technologies developed in the course of the project in the market. With the purpose to facilitate the development of this technology and its introduction in the market, all the project phases will be supported by rigorous technical and economic criteria”.

From TSI side, this project represents an unbeatable opportunity to have access to the hydrogen sector, and enable the development of the operation and maintenance of a monitoring system based on industry 4.0 tools that can be used commercially in the short-term future. Therefore, TSI reaffirms its bet on the innovation and R&D to remain competitive at the forefront of the engineering.

The OCEANH2 project has been supported by the Ministry of Science and Innovation through the ‘Misiones Ciencia e Innovación’ program, which have been assigned with 70 € million to finance large R&D projects aimed at solving relevant challenges of the society. This program funded by the Center for Industrial Technological Development (CDTI) seeks to promote solutions to transversal and strategic challenges of the Spanish Society, improving the knowledge and technologies of their companies.

OCEANH2 has been evaluated with the best grade among the projects presented in the call of hydrogen generation, as well as the best project in the framework of the Sustainable Mobility Mission, which is a good indicator of the good quality of the proposal OCEANH2 that contemplated the entire chain of hydrogen production.

Last, the OCEANH2 project is aligned with the commitments of Spain on Climate Change and Energy Transition, as well as their sustainable development goals, favoring the decarbonisation of the Spanish economy to achieve the goals of climate neutrality in 2050, and the commitments of gender equality and social inclusion.