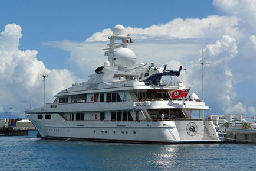 During the month of August, TSI has carried out Noise and Vibration measurements on yacht “MEDUSE“. This yacht, owned by Microsoft co-founder Paul Allen, reached port in the bay of Cádiz for maintenance operations and required TSI services for Crew Occupational Risk Assessment exposure to physical agents: Noise and Vibrations.

and Directive 2002/44/EC (Vibrations). Both directives regulate the levels of exposure to physical agents of workers in the European Union, and are mandatory from February 2011 in all Member States, and particularly in Spain by R. D. 286/2006.

The low vibration and noise levels measured at different locations of the yacht have ensured that the crew exposure levels SUCCESSFULLY MEET with both Directives 2003/10/EC and 2002/44/EC, and also with R. D. 286/2006.